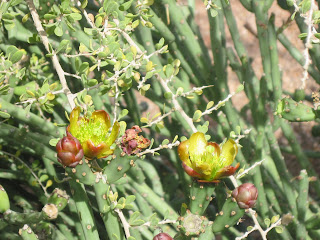 I am enamored of cholla with their rugged beauty, shimmering spines, and breathtaking flowers and right now they are putting on a spectacular show in the front garden.
For decades all jointed cactus were summarily lumped into one enormous genus, Opuntia. But not long ago, botanists woke up and realized there was a lot of variation in the group and began to split things up. The result is that our friends the prickly pears, those with flat stems (pads) are still in Opuntia, but the ones with cylindrical stems now reside in the clumsily named genus, Cylindropuntia.
We have five members of the gang in the front; the cane cholla (Cylindropuntia spinosior), what I think is buckhorn cholla (C. acanthocarpa), teddy bear cholla (C. bigelovii) and pencil cholla (C. aciculata). 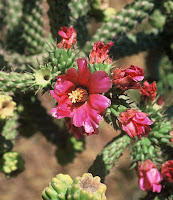 The cane cholla was here when we moved in over 20 years ago. It lives near the street, gets watered when we think about it or it rains and has the most spectacular flowers of them all. These blossoms are a deep, rich purple and in a kind of bonus round it retains its bright yellow fruit in long cascades for years. 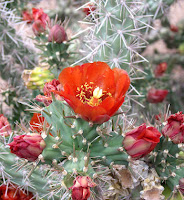 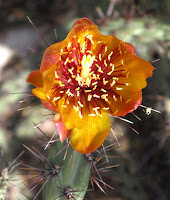 The buckhorn cholla come in two color forms, which is not at all uncommon this species. We inherited a nice orange one and soon found that our neighbor had one with a beautiful deep copper flower. So one year, we swapped and now each of us have big, robust plants that bloom extravagantly in both colors. Ours are along the driveway and make returning home at this time of year even more enticing.
Our pencil cholla also lived here before us and when it came time to build the wall for the front patio, it presented a tricky problem. It was closer to the proposed wall but with judicious pruning, and great care, the wall got built. For many year, this cholla housed the detritus collected in the name of a home by a pack rat family. But they must have died out because they have been gone for a while now. It could be my favorite among favorites, with its slim stems, shrubby habit and odd, yellowish flowers rimmed with brown. 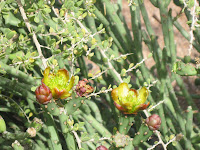 There are two teddy bear cholla out front; one on the caliche ledge that separates us from our neighbor, and the other just beyond the west opening of the patio. The one on the far reaches of the front is in full bloom with its lime green flowers perched atop its chubby stems. The other is more typical of this species and never blooms but does glow daily in the rays of the setting sun. Both are gaily spreading a carpet of discarded stems along the ground at their feet to make the cholla forest I dream about as they take hold.
I count on our cactus to mark the fading of spring to summer, marking one of the finest season of our year. And once again, those snarly but beloved cholla have no let me down.
Posted by Mary Irish at 2:57 PM 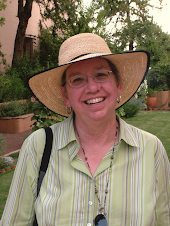